Bobby Hilliard spent most of his life in the foodservice business. First, he worked with his father in the family restaurant. Later as a foodservice design consultant. Retirement was to be filled with days on the golf course, but it did not work out that way.

February 2009 began protests all over the country as a manifestation of discontent of We the People of too much government spending, bailouts signed by President George W. Bush, and the many other federal government programs that were considered to be beyond the federal government’s authority. There seemed to be no end to it.

In order to find out where we have gone wrong, Bobby started searching websites to find like-minded friends. One website in particular had a constitution study group, so he joined. It was eye-opening! It was not hard to realize that the federal legislators’ failure to adhere to the limits in the Constitution was the problem.

After years of study on strict construction of the Constitution under his mentor, he collated 70 of her papers into the book The Handbook for We the People. The book is intended to be used as a supplemental text at the 11th and 12th grade levels in private high schools. The long term goal is to start filling the pipeline with constitutionally literate students, teachers, candidates, legislators, and voters.

Bobby graduated from Stephen F. Austin State University in Nacogdoches in 1971 with a BBA in Business and married his girlfriend, Marilyn the same year. He spent his college summers manning the family shrimp boats in Galveston Bay catching shrimp for the restaurant. At the same time, he took flying lessons, and obtained his Private Pilot Certificate. Later, he built and flew his own homebuilt aircraft. He is 75 years old and never too old to learn. 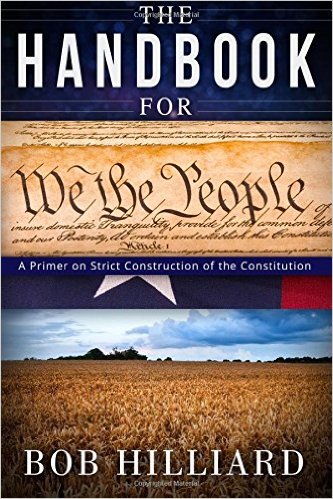 Order from Amazon, Kindle or Paperback